Back to index of "this and that in my life" pages by Donald Sauter.

Meet Your Neighbor (me)

The Delaware State News featured me in their Sunday paper "Meet Your Neighbor" feature (can't figure any way around the redundancy) in Oct 2006.

I thought I might as well get double duty out of it and slap it up on the web. You would never know it, but it actually involved quite a bit of stewing over. Most of it appears in some form or another on my site, but pulling it together in a little summary can't hurt.

I could never get an answer to my question, "Why did you invite me to be featured?" It was a few days after I had sent an oddball little letter to the editor calling for the tar-and-feathering of the person responsible for the demolition of the Hanson House in Dover (our mayor?), and so I suspected that's what got their attention. But they wouldn't confirm that suspicion. In fact, they never printed my letter.

Without any rigorous effort to keep this "profile" up to date, I have made additions and deletions now and then.

What I do: Tutor.

What I like most about what I do: Watching light bulbs go off; pulling students to the next level; passing my academic skills on to my "apprentices"; and sharing some laughs along the way.

If I had picked a different occupation . . . I'd prefer to work within the public school system, in an elementary school. I'd like a chance to demonstrate what a powerhouse combination classroom instruction working in conjunction with lively, one-on-two sessions with a talented academic coach would make. This would be for all students, not just those at the academic extremes. Note my claim that, even though one-on-one is universally considered the gold standard of education, one-on-two beats it in every way.

What I like most about living here: Much more relaxed than where I came from, a Washington, D.C. suburb in Prince George's County, Maryland.

Changes I'd like to see in this area: For a start, I'd like to see the person most responsible for selling the Hanson House down the river for chump change tarred and feathered. That was Dover's neatest old building, on the most perfect spot.

Imagine walking down the steps of your state capitol, glancing to the left, and seeing a wonderful old house like that sitting up at the and of the lane!

I'd like to see all the ugliness brought upon the fields around Dover Downs racetrack in the last year (since Sep 2005) undone. It had always been the prettiest drive. The fields, used twice a year for Nascar race fan parking, were pristine. Now there are concrete barriers, chain link fences, gravel lanes, light poles, power lines, and signs, signs, signs, and more signs. What made all this so necessary now, after so many decades without any of it?

I'd like to see an absolute moratorium on new development. Paving the earth over has to stop somewhere; might as well be Kent County. And our property values would skyrocket overnight.

Culture-wise, I'd like to see a performing arts venue in the area connect with the voice department of a nearby music school (U. of Delaware, U. of Maryland, Curtis, Peabody?) to bring opera to Kent County. Put the other way around, the only thing I miss about Prince George's County, and miss sorely, are the opera productions and workshops of the voice department of the University of Maryland. Those students were talented!

In the original article, I mentioned my volunteer work at the MARK Adult Literacy Center in Dover. MARK stands for "More Adult Readers in Kent County." To be honest, that never really took off.

I've always enjoyed joining in clean-up efforts, such as at Bombay Hook Wildlife Preserve and the annual Coastal Cleanup. I also pick up in and around my neighborhood. This is not to say that people need to be pigs just so that I have some activity to feel good about.

My interests and hobbies:

Classical guitar, opera, Scrabble and other games, sports, education, government, justice, the absurdity of Darwinian micro-step evolution . . . Some rainy day just plug my name into Google, and my site comes up right at the top. (Web readers, you're already here!)

Thrill to my reasons for switching from clumsy, old Base 10 to user-friendly Base 8. (Ok, I'm not holding my breath on that one.)

You can also see an action shot of me playing Roofball with my nephew. (It sure beats that mug shot the Delaware State News insisted on using.) 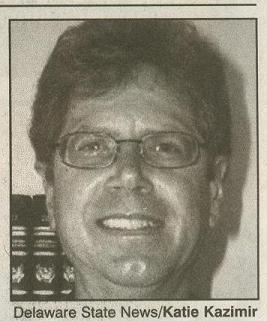 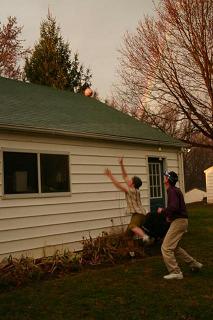 As documented by my web site, I was a co-inventor of the sport with some neighbor friends when we were kids - accept no other Roofball claims! My Roofball page is even referenced by a U.S. patent, which you can confirm by plugging "donald sauter" into Google's patent search.

I enjoy the twice-a-week auction at Spence's bazaar here in Dover. It has a natural, low-key carnival-like atmosphere. Like my mom used to say, auctions are like museums; you see all sorts of unusual things you don't find anywhere else.

I find taking my one-man, inflatable rowboat out on Silver Lake extraordinarily peaceful and relaxing. I think most Doverites would be amazed at how untouched and secluded the upper reaches of Silver Lake are, and how beautiful sunsets are from the lake. Out on the lake, I pull out a book rather than fishing gear. That's the life!

People I admire: My favorite writer is O. Henry. I heartily recommend his complete works to all Americans.

My guiding philosophy: An ever-so-slightly modified Golden Rule: Don't do what you wouldn't want others to do.

What I feel strongly about: Pure democracy and justice. I'd like to see government reduced to a simple, efficient system of justice based on common sense and conscience. When everyone treats everyone fairly, what else matters?

While we're waiting for that, I'd like to see our political "leaders" replaced with a system of direct vote by the people on any issue. What could be simpler in this day and age? We're not babies, after all.

My advice to today's youth: Don't take everything for granted. We live in a world that couldn't have been imagined in science fiction not so many years ago.

Also, get excited about knowledge. The more you know, the more connections you find between everything - and that's a lot of fun.

If that all sounds a bit high-flown, here's something more down to earth: read the complete Grimm's Fairy Tales, all 812 pages. They're a gas.

That's it for the Meet Your Neighbor article, but I figure this is as good a dumping place as any for a few letters to the editor that grind away at my soapbox issues of a moratorium on new development and pure democracy. Of course, my thoughts apply as well to the whole country - and whole world.

In the first case, we were asked to vote on four different proposals for what to do with a former golf course in the county. The proposals involved various combinations of golf course, community center, park, "passive recreation and open space", etc. Here's me:

Being of sound mind and pretty good soul, I propose Garrison's Lake Golf Course Scenario 5, if it's not too late.

You will see that my proposal is a complete inversion of the small-minded visions put before us. I propose that, instead of preserving a few-acre golf course while paving over the rest of Kent County, those few acres be allocated to densely-packed, high-rise (the sky's the limit!) condos for everyone desiring to move to Kent County, Delaware, who is not willing to move into existing housing, and a moratorium be placed on any further development of Kent County.

But, of course, it is too late.

The next one might sound a little too provincial, but give it a listen. Kent Count's "Levy Court" is what everybody else would call a County Council. Sound to you like government is in the pocket of the developers? There's no slowing to even catch a breath while we build up every remaining square foot of the county.

You recently reported that the Levy Court decided 4-3 against a proposed six-month moratorium on accepting major subdivision applications while the Kent county planning staff takes stock of the situation.

I don't know, but I suspect that the Levy Court may have acted in opposition to public sentiment. I suggest that in this day and age, with our quick, cheap, and easy electronic communication, public servants never need to presume whether or not they are acting in support of, or disregard for, majority will. How long could it take to tally a few hundred, or thousand, even, "yeas" and "nays" in email subject lines?

The same piece reported Commissioner Donald A. Blakey saying that "growth is positive for the county." In an opinion piece in the same issue, Jim Flood Sr. wrote, "Much of this change [the rapid growth in Kent County] will be good."

This is always taken for granted, but I've always wondered, when you have something good, why not preserve it? Isn't MORE MORE MORE! BIGGER BIGGER BIGGER! a surefire recipe for eventual disaster?

For the sake of argument, consider the extreme case - a complete and indefinite moratorium on new construction in Kent County. Who would be hurt? Probably not Realtors, since our property would become extremely desirable and property values would skyrocket over night. Some of the new construction business would shift over to replacing, repairing, and modernizing old housing and commercial buildings. We could pay off developers and builders through a transition period until the workforce has adjusted to this new, "steady state" Kent County. In any case, county boundaries are just a few miles away in any direction for developers who can't stop. All the while, outsiders would look at Kent County with drop-jawed envy.

If what I've written is simplistic - and how can such a huge issue boiled down to one paragraph not be? - it is no moreso than "Growth is good." I have no crazy hope that such a moratorium will come to pass, only a wish that everyone take a step back to get a bigger picture.

Last week the United Nations issued a report prepared by 388 experts and scientists. It presents evidence, if any is needed beyond opening your eyes and looking around you, that we humans are living far beyond our means and damaging the environment at a far greater rate than it can repair itself. The UN report speaks of nearing "points of no return."

If there is any reasonable hope for the future of the earth and mankind, perhaps Kent County, Delaware, could make its mark by becoming the first political district in the United States, on planet Earth, to come to its senses and say, "That's it. Enough is enough. No more new development. Ever."

Contact Donald Sauter: send an email; view guestbook; sign guestbook.
Back to Donald Sauter's main page.
Rather shop than think? Please visit My Little Shop of Rare and Precious Commodities.
Back to the top of this page.

Helpful keywords not in the main text: Allan Angel.

Parents, if you're considering tutoring or supplemental education for your child, you may be interested in my observations on Kumon.